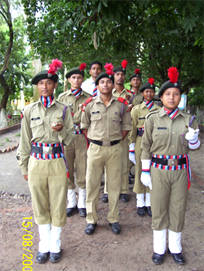 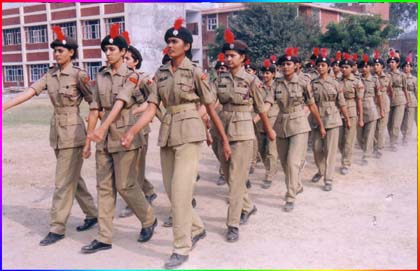 
A nation becomes strong and prosperous over the shoulders of youth and under the able guidance of visionary people. It requires aconcentrated effort to channelize the youth's energy, enthusiasm,endurance and aspiration into useful qualities like integrity, self respect, national integration, unselfishness and to always be concerned with national interest. It is a continuous process. The NCC organization has the lead in achieving this goal. Thus itbecomes imperative to know what is NCC ? what does it profess, what does it offer to young boys ? how does it help in achieving national goals ?The National Cadet Corps (NCC) has its genesis in the'University Corps' which was created under the India Defence Act1917 with the object to make up the shortage of the Army. In 1920,when the Indian Territorial Act was passed, the 'University Corpswas replaced by the 'University Training Corps' (UTC) in 1942 the UTC was renamed as the University Officers Training Corps (UDTC)The need to create a youth organization at National level to train theyoung boys and girls to be better citizens and future leaders of ourgreat country in all walks of life, including Defence forces, was rightly realized by our leaders. A committee under Pandit HM Kunzru was set up in 1946 on the behalf of our First Prime Minister Pandit Jawaharlal Nehru. The NCC Act XXXVI of 1948 under the Ministry of Defence (MOD).

MOTTO OF NCC
'Unity and Discipline'

The motto of the NCC is 'Unity and Discipline' which was adopted on 23rd December, 1957 in living up to its motto the NCC strives to be and is one of the greatest cohesive forces of our nations, bringing together the youth hailing from different parts ofour country and molding them into united, secular and disciplined citizens of our nation.

i) To develop qualities of character, courage, Comradeship, discipline, leadership, secular outlook, spirit of adventure andsportsmanship and ideals of selfless service among the youth to make them useful citizens.
ii) To create human resource of organized, trained and motivate youth, to provide leadership in all walks of life including the armed forces and always available for the services of nation.
iii) To create suitable environment to motivate the youths and to take up a career in the armed forces.
The aim is achieved by institutional training by way of defence services work-ethos and characterized by –
• Hard Work.
• Sincerity of purpose.
• Honesty.
• Ideal of selfless service.
• Dignity of labour.
• Secular outlook.
• Comradeship.
• Spirit of adventure.
• Sportsmanship.

A unit of cadets was established on 1963-64 in our college. At present we have a unit including 106 cadets we try our level best to achieve the aims and targets of NCC.